This student submission comes from my former student A’Lyssa Rodriguez. Her topic, from Geometry: proving that the measures of a triangle’s angles add to 180 degrees.

People generally do not believe something until they can see it for themselves. So this activity can help do just that. Each student will receive a sheet of paper. They are then asked to draw a triangle on that sheet of paper and cut it out. Having each student draw their own triangle allows for many types of triangles and further proving the point later. Once the triangles are cut, each student will rip off each angle from the triangle. Next, they will arrange those pieces so that each vertex is touching the other. Once all the vertices are touching, they will notice that a straight line is formed and therefore proving that the sum of a triangles angles all add up to 180 degrees.

What interesting things can you say about the people who contributed to the discovery and/or the development of this topic?

Euclid proves that the measures of a triangle’s angles add up to two right angles (I. 32) in the compilation geometrical proofs better known as Euclid’s Elements. This compilation was actually all the known mathematics at the time.  So not all of the theorems were written or discovered by Euclid, rather by several individuals such as Pythagoras, Hippocrates, Theudius, Theaetetus and Eudoxus. Euclid’s Elements actually consist of 465 theorems, all of which are proven with only a ruler (straight edge) and compass. This book was so important to the mathematical community that it remained the main book of geometry for over 2,000 years. It wasn’t until the early 19th century that non-Euclidean geometry was considered.

How has this topic appeared in high culture (art, classical music, theatre, etc.)?

Students can be given a variety of images such as the Louvre, the pyramids in Egypt, certain types of sports plays, and the Epcot center in Disney World and then be asked what they all have in common. It may or may not be hard for them to notice but they all have triangles. Then, hand the students the same images but with the triangles outlined and with the measurement of all the angles. They can then compute the sum of the angles for each triangle. Each triangle obviously looks different and all the angles are different but the sum will always be 180 degrees.

I’m doing something that I should have done a long time ago: collecting a series of posts into one single post. Here’s my series on the mathematical magic show that I’ll perform from time to time.

I’m doing something that I should have done a long time ago: collecting a series of posts into one single post. The following links comprised my short series on a couple of easily stated but remarkably difficult geometry problems.

Math With Bad Drawings had an interesting post about solving for

in the following picture (this picture is taken from http://thinkzone.wlonk.com/MathFun/Triangle.htm):

I had never heard of this problem before, but it’s apparently well known and is called Langley’s Adventitious Angles. See Math With Bad Drawings, Wikipedia, and Math Pages for more information about the solution of this problem. Math Pages has a nice discussion about mathematical aspects of this problem, including connections to the Laws of Sines and Cosines and to various trig identities.

I’d encourage you to try to solve for

without clicking on any of these links… a certain trick out of the patented Bag of Tricks is required to solve this problem using only geometry (as opposed to the Law of Cosines and the Law of Sines). I have a story that I tell my students about the patented Bag of Tricks: Socrates gave the Bag of Tricks to Plato, Plato gave it to Aristotle, it passed down the generations, my teacher taught the Bag of Tricks to me, and I teach it to my students. In the same post, Math With Bad Drawings has a nice discussion about pedagogical aspects of this problem concerning when a “trick” becomes a “technique”.

I recommend this problem for advanced geometry students who need to be challenged; even bright students will be stumped concerning coming up with the requisite trick on their own. Indeed, the problem still remains quite challenging even after the trick is shown.

We now have a winner for the worst math education video on YouTube:

My personal favorite part is demonstrating that 140*9 is a multiple of 9 by casting out nines.

Why is this so awful? There are two essential ideas that make this work:

The first part of the video shows that, when 360 degrees is successively bisected, the digits of the resulting angle still sum to 9. That’s because dividing by 2 is the same as multiplying by 5 and then dividing by 10. Dividing by 10 is unimportant for the purpose of adding digits, so the only operation that’s important is multiplying by 5. And of course, if a multiple of 9 is multiplied by 5, the product is still a multiple of 9.

Notice that’s important that the angles are successively bisected. If the angles were trisected instead, this would fail (360/3 = 120, which is not a multiple of 9.)

degrees. All this to say, there’s nothing mystical about this. The second part of the video is a logical consequence of choosing 360 degrees for measuring circles.

The third part of the video is utter nonsense.

In a recent class with my future secondary math teachers, we had a fascinating discussion concerning how a teacher should respond to the following question from a student:

Usually, the answer is no. In this series of posts, we’ve seen that a conjecture could be true for the first 40 cases or even the first

1. Theorem. The sum of the angles in a convex n-gon is

This theorem is typically proven after first proving the following lemma:

Lemma. The sum of the angles in a triangle is

Clearly the lemma is a special case of the main theorem: for a triangle,

. The proof of the lemma uses alternate interior angles and the convention that the angle of a straight line is 180 degrees. 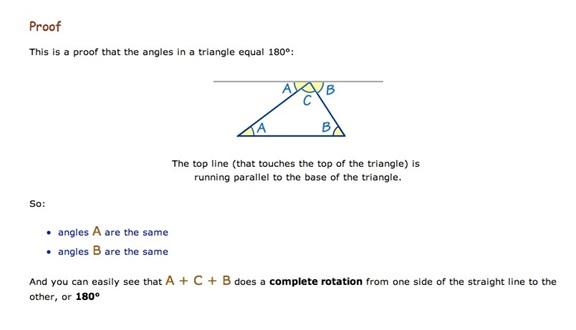 Using this, the main theorem follows by using diagonals to divide a convex n-gon into