Last March, on Pi Day (March 14, 2015), I put together a mathematical magic show for the Pi Day festivities at our local library, compiling various tricks that I teach to our future secondary teachers. I was expecting an audience of junior-high and high school students but ended up with an audience of elementary school students (and their parents). Still, I thought that this might be of general interest, and so I’ll present these tricks as well as the explanations for these tricks in this series. From start to finish, this mathematical magic show took me about 50-55 minutes to complete. None of the tricks in this routine are original to me; I learned each of these tricks from somebody else.

This is a magic trick that my math teacher taught me when I was about 13 or 14. I’ve found that it’s a big hit when performed for grade-school children. Here’s the patter:

Magician: Tell me a number between 5 and 10.

Child: (gives a number, call it

Magician: On a piece of paper, draw a shape with

Child: (draws a figure; an example for

Important Note: For this trick to work, the original shape has to be convex… something shaped like an L or M won’t work. Also, I chose a maximum of 10 mostly for ease of drawing and counting (and, for later, calculating).

Magician: Tell me another number between 5 and 10.

Child: (gives a number, call it

Magician: Now draw that many dots inside of your shape.

dots inside the figure; an example for

) While the child does this, the Magician calculates

Magician: Now connect the dots with lines until you get all triangles. Just be sure that no two lines cross each other.

Child: (connects the dots until the shape is divided into triangles; an example is shown) 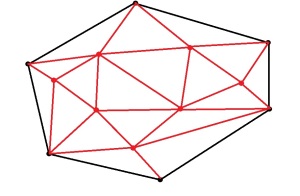 Magician: Was your answer… (and turns the answer over)?

The reason this magic trick works so well is that it’s so counter-intuitive. No matter what convex

gon is drawn, no matter where the

points are located, and no matter how lines are drawn to create triangles, there will always be

triangles. For the example above,

, and there are indeed

triangles in the figure.

This trick works by counting the measures of all the angles in two different ways.

triangles created, then the sum of the measures of the angles in each triangle is

degrees. So the sum of the measures of all of the angles must be

Method #2: The sum of the measures of the angles around each interior point is

degrees. Since there are

interior points, the sum of these angles is

sides. So the sum of these measures is 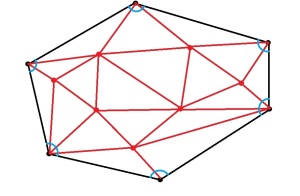 These two different ways of adding the angles must be the same. In other words, it must be the case that

I’m often asked why it was important to choose a number between 5 and 10. The answer is, it’s not important. The trick will work for any numbers as long as there are at least three sides of the polygon. However, in a practical sense, it’s a good idea to make sure that the number of sides and the number of points aren’t too large so that the number of triangles can be counted reasonably quickly.

After explaining how the trick works, I’ll again ask a child to stand up and play the magician, repeating the trick that I just did, before I move on to the next trick.

One thought on “My Mathematical Magic Show: Part 3b”