This student submission comes from my former student Fidel Gonzales. His topic, from Precalculus: vectors in two dimensions.

How can this topic be used in your students’ future courses in mathematics?

Vectors in the two dimension is used all around our everyday life and we as people rarely notice it. The most common use of vectors in our culture is a quantity displaying a magnitude and direction. This is normally done on a x and y graph. Now you might be asking yourself, I do not play any types of games that sound like this. I am here to tell you that you do. One game that iPhone users play without noticing this would be a game on gamepigeon called knockout. The game appears to be an innocent game of knocking out your friends’ penguins while keeping yours in the designated box. However, math is involved, and you probably didn’t notice. First you must anticipate where the enemy is going. Then you must decide how strong you want to launch your penguin troopers without making them fall out of the ring. Does that sound familiar? Having to apply a force (magnitude) and direction to a quantity. Congratulations, you have now had fun doing math. Next time you are playing a game, try to see if there is any involvement of vectors in two dimensions involved.

Vectors in two dimensions has many ways to be incorporated in the classroom. A way to do so while connecting to the real world would be having an activity where the students tell a robot where to go using vectors. The students will have a robot that can walk around and in need of directions. The students will be given maps and asked to create a path for the robot to end up in its destination. Essentially, programming the robot to navigate though a course solely using vectors. If the robot falls or walks too far, then the student will realize that either the magnitude was wrong or the direction. Some students might seem to think this would be impractical to the real world, however, there is always a way to show relevance to students. Towards the end of the activity, the students will be asked to guide me to around the class using vectors. Then to sweeten the deal, they will also be asked to show me on a map being projected to them how to get to McDonald’s. Students will realize that vectors in the second dimension could be used to give directions to somewhere and can be applied to everyday life.  They will walk outside of the classroom seeing math in the real world from a different perspective.

This student submission comes from my former student Chi Lin. Her topic, from Precalculus: computing the cross product of two vectors.

I found one of the real-life examples of the cross product of two vectors on a website called Quora. One person shares an example that when a door is opened or closed, the angular momentum it has is equal to

is the linear momentum of the free end of the door being opened or closed, and

is the perpendicular distance from the hinges on which the door rotates and the free end of the door. This example gives me an idea to create an example about designing a room. I try to find an example that closes to my idea and I do find an example. Here is the project that I will design for my students. “If everyone here is a designer and belongs to the same team. The team has a project which is to design a house for a client. Your manager, Mr. Johnson provides a detail of the master room to you and he wants you to calculate the area of the master room to him by the end of the day. He will provide every detail of the master room in three-dimension design paper and send it to you in your email. In the email, he provides that the room ABCD with

. Find the area of the room  (I will also draw the room (parallelogram ABCD) in three dimensions and show students).”

How does this topic extend what your students should have learned in previous courses?

How did people’s conception of this topic change over time?

Most people have the misconception that the cross product of two vectors is another vector. Also, the majority of calculus textbooks have the same misconception that the cross product of two vectors is just simply another vector. However, as time goes on, mathematicians and scientists can explain by starting from the perspective of dyadic instead of the traditional short‐sighted definition. Also, we can represent the multiplication of vectors by showing it in a geometrical picture to prove that encompasses both the dot and cross products in any number of dimensions in terms of orthogonal unit vector components. Also, by using the way that the limitation of such an entity to exactly a three‐dimensional space does not allow for one of the three metric motions (reflection in a mirror). We can understand that the intrinsic difference between true vectors and pseudo‐vectors.

I am pleased to announce that my latest paper, “Parabolic Properties from Pieces of String,” has now been published in Math Horizons. This was a really fun project for me. As I describe in the paper, I started wondering if it was possible to convince a student who hadn’t learned calculus yet that string art from two line segments traces a parabola. Not only was I able to come up with a way of demonstrating this without calculus, but I was also able to (1) prove that a quadratic polynomial satisfies the focus-directrix property of a parabola, which is the reverse of the usual logic when students learn conic sections, and (2) prove the reflective property of parabolas. I was really pleased with the final result, and am very happy that this was accepted for publication.

Due to copyright restrictions, I’m not permitted to freely distribute the final, published version of my article. However, I am able to share the following version of the article.

The above PDF file is an Accepted Manuscript of an article published by Taylor & Francis in College Mathematics Journal on February 24, 2022, available online: Full article: Parabolic Properties from Pieces of String (tandfonline.com)

Last week, I posted that my latest paper, “A New Derivation of Snell’s Law without Calculus,” has now been published in College Mathematics Journal. In that previous post, I didn’t provide the complete exposition because of my understanding of copyright restrictions at that time.

I’ve since received requests for copies of my paper, which prompted me to carefully read the publisher’s copyright restrictions. In a nutshell, I was wrong: I am allowed to widely distribute preprints that did not go through peer review and, with extra restrictions, the accepted manuscript after peer review.

The above PDF file is an Accepted Manuscript of an article published by Taylor & Francis in College Mathematics Journal on January 28, 2022, available online: Full article: A New Derivation of Snell’s Law Without Calculus (tandfonline.com).

I’m pleased to say that my latest paper, “A New Derivation of Snell’s Law without Calculus,” has now been published in College Mathematics Journal. The article is now available for online access to anyone who has access to the journal — usually, that means members of the Mathematical Association of America or anyone whose employer (say, a university) has institutional access. I expect that it will be in the printed edition of the journal later this year; however, I’ve not been told yet the issue in which it will appear.

Because of copyright issues, I can’t reproduce my new derivation of Snell’s Law here on the blog, so let me instead summarize the main idea. Snell’s Law (see Wikipedia) dictates the angle at which light is refracted when it passes from one medium (say, air) into another (say, water). If the velocity of light through air is

while its velocity in water is

, then Snell’s Law says that

I was asked by a bright student who was learning physics if there was a way to prove Snell’s Law without using calculus. At the time, I was blissfully unaware of Huygens’s Principle (see OpenStax) and I didn’t have a good answer. I had only seen derivations of Snell’s Law using the first-derivative test, which is a standard optimization problem found in most calculus books (again, see Wikipedia) based on Fermat’s Principle that light travels along a path that minimizes time.

Anyway, after a couple of days, I found an elementary proof that does not require proof. I should warn that the word “elementary” can be a loaded word when used by mathematicians. The proof uses only concepts found in Precalculus, especially rotating a certain hyperbola and careful examining the domain of two functions. So while the proof does not use calculus, I can’t say that the proof is particularly easy — especially compared to the classical proof using Huygens’s Principle.

That said, I’m pretty sure that my proof is original, and I’m pretty proud of it. 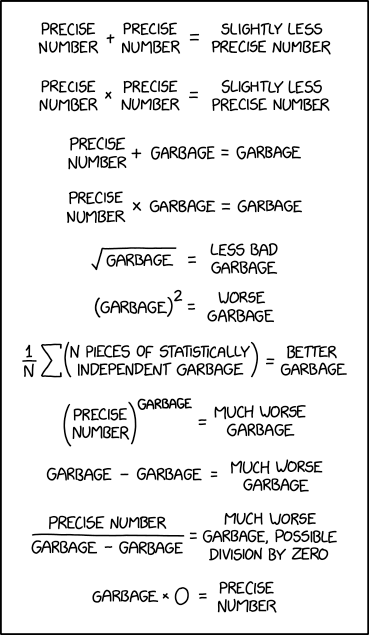 A good mathematical explanation of this comic can be found here: https://www.explainxkcd.com/wiki/index.php/2295:_Garbage_Math 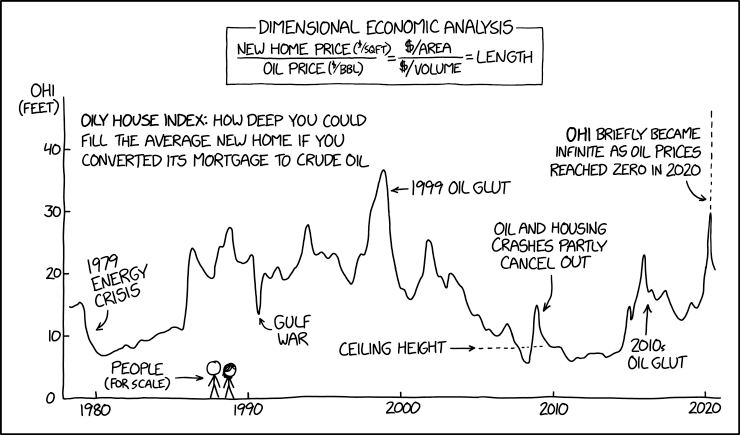 No other textbook, and possibly no other book, will ever have a better opening paragraph than Goodstein's "States of Matter": pic.twitter.com/XkjvEj6sZR