With the last four posts as prelude, let’s consider finding the inverse of the function

Of course, we can’t find an inverse for this function as stated. Colloquially, the graph of

. (Indeed, there are infinitely many such pairs —

— but that’s beside the point.)

So how will we find the inverse of

? Well, we can’t. But we can do something almost as good: we can define a new function

Notice that the function

, except that the domain has been restricted. In this way, the left half of the graph of

is essentially erased to produce the graph of 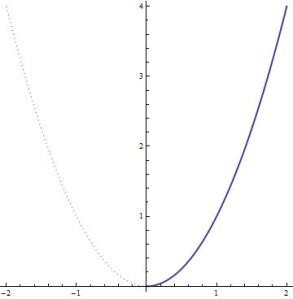 So while the graph of

fails the horizontal line test, the graph of

Also, the graph of

can be produced by reflecting through the line

, producing the purple graph below. 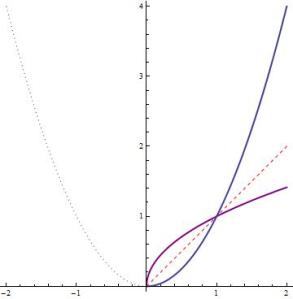 Of course, the function

is more customarily written as

. Stated another way using the restricted domain of

Pedagogically, when teaching Precalculus, I’ve found that this way of writing the definition of

is a useful prelude to the definition of the inverse trigonometric functions.

A couple of notes: