Numerical integration is a standard topic in first-semester calculus. From time to time, I have received questions from students on various aspects of this topic, including:

In the previous post in this series, I discussed three different ways of numerically approximating the definite integral

, the area under a curve

In this series, we’ll choose equal-sized subintervals of the interval

is the width of each subinterval so that

, then the integral may be approximated as

using the midpoints of the subintervals. We have also derived the Trapezoid Rule:

This last approximation was obtained by connecting adjacent points on the curve by line segments, creating trapezoids:

are connected with one parabola, while the points

are connected with a different second parabola.

The derivation of Simpson’s Rule is more complicated than the derivation of the Trapezoid Rule because we need to use calculus to find the area under these parabolas. To begin, we make the simplifying assumption that

. Since each subinterval has width 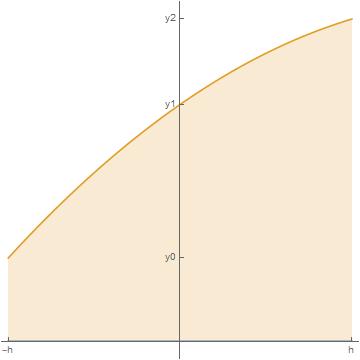 To find the area under this parabola, we first need to find the equation of the parabola

. This entails solving a system of three equations in three unknowns:

While most 3×3 systems are cumbersome to solve, this system is straightforward. Clearly,

. Also, subtracting the first equation from the third equation yields

Finally, we solve for

by substituting into the third equation:

Next, we find the integral of

passes through the points

will pass through the points

. The area under this curve is

After using the substitution

which is the same integral that we saw earlier. Therefore,

Finally, we need to find the sum of the areas under all of these parabolas. Similarly, the area under the parabola passing through

. So, for the particular example shown above, the total area under the parabolas will be

The coefficients of 4 arose from the above integrals, while the coefficient of 2 came from combining the two areas. In general, if there are

is even, then Simpson’s Rule gives the approximation

One thought on “Thoughts on Numerical Integration (Part 5): Derivation of Simpson’s Rule”