In a recent class with my future secondary math teachers, we had a fascinating discussion concerning how a teacher should respond to the following question from a student:

Usually, the answer is no. In this series of posts, we’ve seen that a conjecture could be true for the first 40 cases or even the first 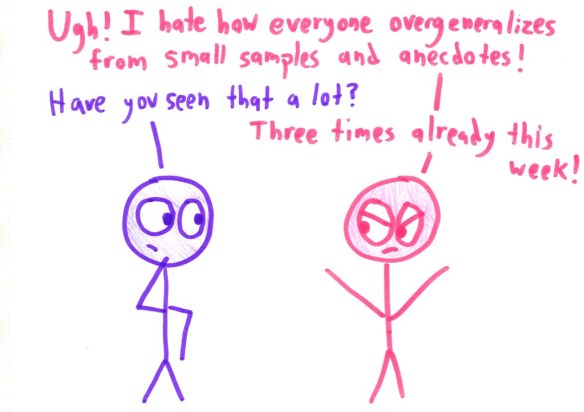 However, there are plenty of examples in mathematics where it is possible to prove a theorem by first proving a special case of the theorem. As I’ve hopefully shown through this series, using only examples that could appear in the secondary curriculum, this is a technique that comes up again and again in mathematics, and here’s a story that a like to tell my students to get this idea across.

Here’s a story that I’ll tell my students when, for the first time in a semester, I’m about to use a lemma to make a major step in proving a theorem. (I think I was 13 when I first heard this one, and obviously it’s stuck with me over the years.)

At MIT, there’s a two-part entrance exam to determine who will be the engineers and who will be the mathematicians. For the first part of the exam, students are led one at a time into a kitchen. There’s an empty pot on the floor, a sink, and a stove. The assignment is to boil water. Everyone does exactly the same thing: they fill the pot with water, place it on the stove, and then turn the stove on. Everyone passes.

For the second part of the exam, students are led one at a time again into the kitchen. This time, there’s a pot full of water sitting on the stove. The assignment, once again, is to boil water. Nearly everyone simply turns on the stove. These students are led off to become engineers. The mathematicians are ones who take the pot off the stove, dump the water into the sink, and place the empty pot on the floor… thereby reducing to the original problem, which had already been solved.

One thought on “Proving theorems and special cases (Part 17): Conclusion”