. In today’s post, I discuss one of the first places that this becomes practically important: solving the ambiguous case of solving a triangle given two sides and an nonincluded angle.

A note on notation: when solving for the parts of

will be the length of the side opposite

will be the length of the side opposite

will be the length of the side opposite angle

will be the measure of

will be measure of

will be the measure of

. Modern textbooks tend not to use

for these kinds of problems, for which I have only one response:

Why does an SSA triangle produce an ambiguous case (unlike the SAS, SSS, or ASA cases)? Here’s a possible problem that has exactly one solution:

A student new to the Law of Sines might naively start solving the problem by drawing something like this: 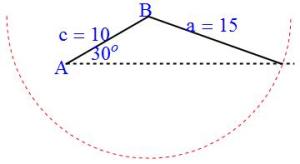 Of course, students should not be expected to make a picture this accurately when doing homework. Fortunately, this impossibility naturally falls out of the equation when using the Law of Sines:

At this point, the natural inclination of a student is to pop out the calculator and find

This is incorrect logic that, as discussed extensively in yesterday’s post, there are two angles between

with a sine of

So we have two different cases to check.

. We begin by solving for

Then we can use the Law of Sines (or, in this case, the Pythagorean Theorem), to find

. In this case, it’s best to use the pair

since the values of

are both known exactly.

. We again begin by solving for

Oops. That’s clearly impossible. So there is only one possible triangle, and the missing pieces are

. Judging from the above (correctly drawn) picture, these numbers certainly look plausible.

). However, I prefer that my students not memorize this rule. Instead, I’d prefer that they list the two possible values of

and then run through the logical consequences, stopping when an impossibility is reached. As we’ll see in tomorrow’s post, it’s perfectly possible for Case 2 to produce a second valid solution with the proper choice for the length of the side opposite the given angle.