This student submission comes from my former student Kerryana Medlin. Her topic, from Geometry: defining the terms collinear and coplanar.

As a quick assessment of knowledge and to get the students up and moving, you could set up the class like this (tape on the walls and floor representing lines):

(Bear in mind that you do not have to put crosses up on your walls. The strips of tape can be of any orientation.)

You have different students have their name on a card with a piece of tape on the back so they can stick it to the wall.

We then draw a name from and I ask them to put their name somewhere coplanar/ collinear/ not coplanar/ not collinear to mine. This can be randomly generated by whichever method I choose.

The student then places their name in relation to mine as specified. Then the students confirm the placement with thumbs up or down.

Then we do the same with the next selected student but in relation to the previous student until either all have gone.

You can always minimize the number of students by selecting them randomly and giving them different colored stickers or something similar.

How has this topic appeared in pop culture?

In Dungeons and Dragons, there are other planes in which other beasts live. So, demons and the like live on another plane of existence. So, these creatures are not coplanar to humans, elves, dwarves, and such. The following is a chart of the different planes of existence in dungeons and dragons: 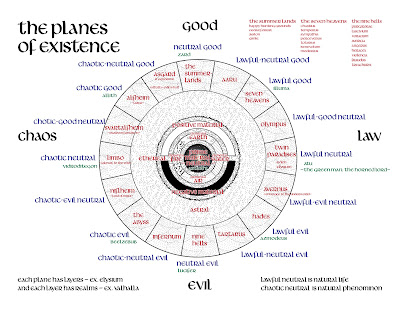 This is not the only example of alternate universes and planes, but it is one of the few pop culture references to different planes which is not gimmicky. For example, both The Simpsons and Family Guy have sent their characters to alternate planes of existence.

How has this topic appeared in high culture?

In paintings, to paint three dimensional spaces, artists have to consider objects as being in the foreground or background. This is an example of two planes of a painting. As well as orienting objects in such a way that they are “laid against” a plane. Within the composition of the paintings, there are typically diagonal lines which can be used to create the illusion of three dimensions in a two-dimensional medium. 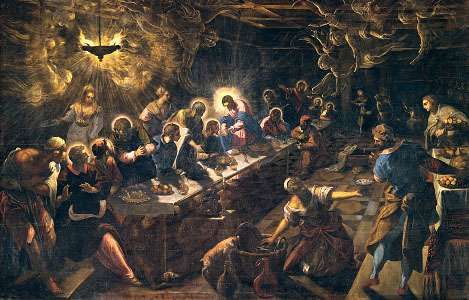 A wonderful example of this concept is The Last Supper by Tintoretto. The table defines the planes of the room. The left-most edge (blue) being the background and the right-most edge (yellow) the foreground. We see that for the blue plane that the ceiling, the heads of the people, and the edge of the table are all set in this plane, so the background is clearly set.
Because of this, we can also tell that the middle of the painting has a plane defined by the shadow of the table on the floor, the right edge of the table, and the “empty space” above. This illusion of empty space was created because the background plane exists.