While some common (i.e., base-10) logarithms work out evenly, like

, most do not. Here is the typical output when a scientific calculator computes a logarithm: 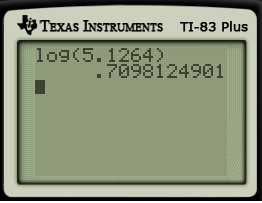 To a student first learning logarithms, the answer is just an apparently random jumble of digits; indeed, it can proven that the answer is irrational. With a little prompting, a teacher can get his/her students wondering about how people 50 years ago could have figured this out without a calculator. This leads to a natural pedagogical question:

Can good Algebra II students, using only the tools at their disposal, understand how decimal expansions of base-10 logarithms could have been found before computers were invented?

Here’s a trial-and-error technique — an exploration activity — that is within the grasp of Algebra II students. It’s simple to understand; it’s just a lot of work. While I don’t have a specific reference, I’d be stunned if none of our ancestors tried something along these lines in the years between the discovery of logarithms (1614) and calculus (1666 or 1684).

, look for integer powers of

that are close to powers of 10.

I’ll illustrate this idea with

Not bad… already, we’ve come across a power of 3 that’s decently close to a power of 10. We see that

Let’s keep going. We just keep multiplying by 3 until we find something close to a power of 10. In principle, these calculations could be done by hand, but Algebra II students can speed things up a bit by using their scientific calculators.

This looks pretty good too. (Students using a standard ten-digit scientific calculator, of course, won’t be able to see all 11 digits.) We see that

Summarizing our work so far, we have

To get a better approximation of

, we keep going. I wouldn’t blame Algebra II students a bit if they use their scientific calculators for these computations — but, ideally, they should realize that these calculations could be done by hand by someone very persistent.

Using this last line, we obtain

Summarizing our work so far, we have

A quick check with a calculator shows that

With a little more work, the approximations

can be found, yielding the tighter inequalities

One thought on “Decimal Approximations of Logarithms (Part 2)”