In case anyone’s wondering, here’s a magic trick that I did my class for future secondary math teachers while dressed as Carnac the Magnificent. I asked my students to pull out a piece of paper, a pen or pencil, and (if they wished) a calculator. Here were the instructions I gave them:

I asked my students one at a time what they got after Step 5, and I responded, as the magician, with the number that they had scratched out. One student said 34, and I answered 2. Another said 24, and I answered 3. After doing this a couple more times, one student simply stated, “My mind is blown.”

This is actually a simple trick to perform, and the mathematics behind the trick is fairly straightforward to understand. Based on personal experience, this is a great trick to show children as young as 2nd or 3rd grade who have figured out multiple-digit subtraction and single-digit multiplication.

I offer the following thought bubble if you’d like to think about it before looking ahead to find the secret to this magic trick.

This trick works because of two important mathematical facts.

Each of the numbers in parentheses is a multiple of 9, and so the difference

must also be a multiple of 9.

A more algebraic proof of (1) is set apart in the block quote below; feel free to skip it if the above numerical example is convincing enough.

More formally, suppose that the original number is

in base-10 notation, and suppose the scrambled number is

is a permutation of the numbers

. Without loss of generality, suppose that the original number is larger. Then the difference

is a multiple of 9, it suffices to show that each term

As I mentioned earlier, I showed this trick (and the proof of why it works) to a class of senior math majors who are about to become secondary math teachers. I think it’s a terrific and engaging way of deepening their content knowledge (in this case, base-10 arithmetic and the rule of checking that a number is a multiple of 9.)

As thanks for reading this far, here’s a photo of me dressed as Carnac as I performed the magic trick. Sadly, most of the senior math majors of 2013 were in diapers when Johnny Carson signed off the Tonight Show in 1992, so they didn’t immediately get the cultural reference. 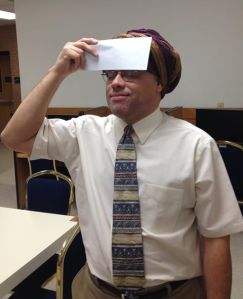 3 thoughts on “A mathematical magic trick”