Here’s a question I once received:

If the pattern goes on, and if

In yesterday’s post, we found that the answer was

a number with approximately

How can we express this number in scientific notation? We need to actually compute the integer and decimal parts of

, and most calculators are not capable of making this computation.

Fortunately, Mathematica is able to do this. We find that

Here’s the Mathematica syntax to justify this calculation. In Mathematica, 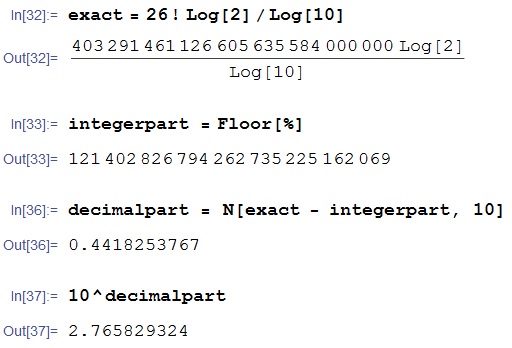 Again, just how big is this number? As discussed yesterday, it would take about 12.14 quadrillion sheets of paper to print out all of the digits of this number, assuming that

was printed in a microscopic font that uses 100,000 characters per line and 100,000 lines per page. Since 250 sheets of paper is about an inch thick, the volume of the 12.14 quadrillion sheets of paper would be

By comparison, assuming that the Earth is a sphere with radius 4000 miles, the surface area of the world is

Dividing, all of this paper would cover the entire world with a layer of paper about

inches thick, or about 35 sheets deep. In other words, the whole planet would look something like the top of my desk.

What if we didn’t want to print out the answer but just store the answer in a computer’s memory? When written in binary, the number

bits of memory, or…

bits of memory, or…

terabytes of memory, or…

about 50.4 trillion terabytes of memory.

Suppose that this information is stored on 3-terabyte external hard drives, so that about

trillion of them are required. The factory specs say that each hard drive measures

. So the total volume of the hard drives would be

By way of comparison, the most voluminous building in the world, the Boeing Everett Factory (used for making airplanes), has a volume of only

. So it would take about 1136 of these buildings to hold all of the necessary hard drives.

The cost of all of these hard drives, at $100 each, would be about $1.680 quadrillion. So it’d be considerably cheaper to print this out on paper, which would be about one-seventh the price at $242 trillion.

Of course, a lot of this storage space would be quite repetitive since

, in binary, would be a one followed by